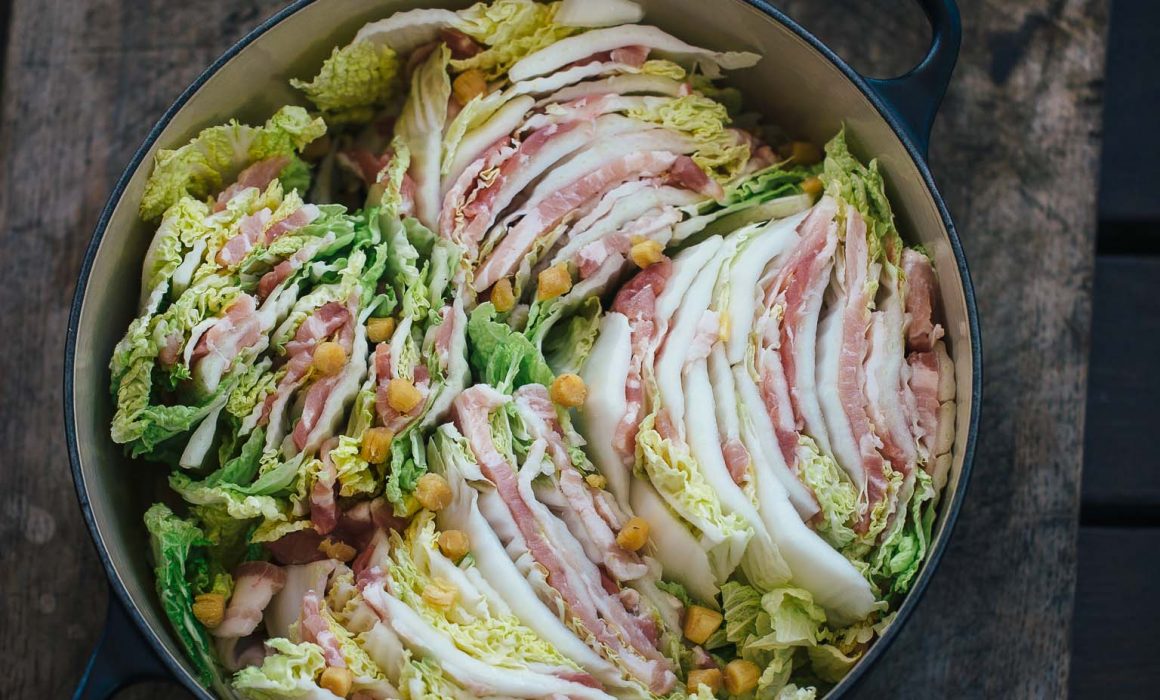 Very thinly slice the pork belly into long strips about the thickness of bacon. You can ask your butcher to do this for you, but if you’re doing it yourself, putting the pork in the freezer for about 1 hour before you start will make it easier to cut. Separate the leaves of the Chinese cabbage. Mix together the salt and white pepper.

Lay a large leaf of Chinese cabbage on a clean cutting board and lay over 2-3 strips of pork. Sprinkle with a little of the salt and pepper mix. You don’t need to cover all of the cabbage leaf. Lay another cabbage leaf over the pork in the opposite direction (the leafy end of the top leaf should be over the stem end of the bottom leaf) and lay over 2-3 more strips of pork and scatter with a little more of the salt and pepper mix. Repeat the process, alternating the direction of the cabbage leaves, and using more leaves per layer for the smaller leaves. You should end up with a large, even and tightly packed pile of layered cabbage and pork.

Cut the block into equal thirds crossways and pack the thirds into a heavy-bottomed casserole dish; enamelled cast iron would be perfect.

Place the lid on the pot and place over low heat for 1 hour without removing the cover.

For the ponzu, boil the sake and mirin together until just boiled. Stir through the soy sauce, lemon juice and sugar until the sugar is dissolved. Allow to cool.

Serve the millefeuille with the ponzu in individual bowls as a dipping sauce.