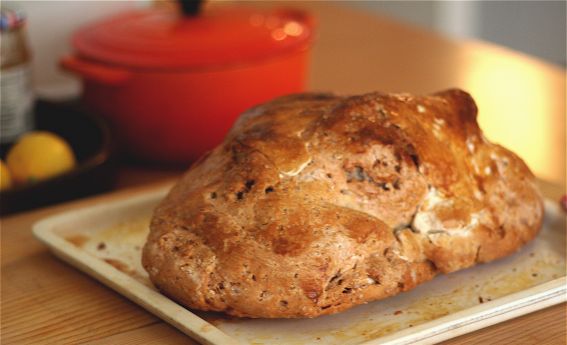 A friend called me last night to invite me over to his house for lunch to play some records and discuss names for a new restaurant that he’s opening up here in Tokyo.  I said I’d bring over some supplies, and in the end decided on roasting a chicken.

There are a lot of recipes for salt-crusted chicken that you see, but until today I’d never before tried any of them.   In truth, my feeling was that if you were going to roast a chicken, why would you want to miss out on the delicious salty, crispy skin that everybody loves.  I decided to try this anyway because it is so easy to transport, and now I am a total convert to the salt crust movement.  I have honestly never had chicken that succulent and juicy before, and the flavour is achieved without eating the skin, or adding any butter or oil whatsoever.   I don’t know if I’m kidding myself, but I think this is a pretty healthy recipe.

First you start with the dough.  Mix together the flour and the rock salt on the bench, and then into a well in the centre add the egg whites and about half a cup of water.   Draw the dough together and knead until it is all combined.  Cover with a tea towel and set aside.

Then to the chicken.  I used a Nagoya Cochin, a Japanese chicken that was first bred in the 1800s as a cross between the native Nagoyan chicken and the black-boned cochin chickens from China.  The meat is tender and the flavour strong and sweet.  The Chinese breed is also supposed to have curative properties, if you believe in that kind of thing.  If you can’t get Nagoya Cochin (and 99% of people reading this probably can’t), I would recommend spending a little extra on a great quality free-range bird; the taste of battery-farmed birds is so weak it is cannot be compared to the real thing.  Quality matters with any ingredient, but with chicken more so than any other meat, commercial farming has sacrificed quality for yield and we are all the poorer for it.  (Other contenders for the title of “Common Food Most Ruined by Commercial Production” are tomatoes, milk, sausages and bread  – but that’s just my opinion.)

Wash and dry the bird and trim any visible fat, and the neck and feet (with many organic birds the neck is left on and the feet are trimmed at the ankle rather than at the drumstick joint.  With the Nagoya Cochin the ankle is a  deep black colour).  Rub the skin with the paprika and then add half the herbs, zest and garlic to the cavity, grinding in a generous amount of black pepper.  In a Jamie Oliver recipe I saw for this once he added the entire lemon to the cavity.  I have always found that this creates an overpoweringly wet and acidic lemon flavour from the juice that drowns out the delicacy of a good bird.  In my opinion, it’s best to stick to the zest only.

Roll out the dough to slightly thicker than 0.5cm and make sure it’s large enough to wrap the entire bird.  Place the bird breast down in the centre of the dough and then stack the rest of the herbs, zest and garlic on top (i.e. the wing side that is facing up).  Fold the dough around to totally enclose the bird and pinch together any holes.

Lightly oil your baking try and turn the package folds down, so that the breast is now facing up.  Glaze the top of the dough with the reserved egg yolks and put into a pre-heated 220C oven for 1.5 hours.  The glaze will give a nice even browning and shine to the dough for presentation.  Relax and tidy up your mess.

That is honestly how easy it is.  When everything was done I threw the entire case into a bag (lined with a little newspaper just in case of any leaks) and headed off to my friend’s house with some raw asparagus, a bottle of Veuve Cliquot and a six pack of Heineken in a cooler bag.  We served the chicken with chargrilled asparagus (white, green and purple asparagus just salted and chargrilled with organic lemon wedges on the side, some salads my friend had made and some beautiful sourdough another friend brought.  We also had a quiche, and sweets from a local patisserie rounding out the meal.

To serve the chicken, use a serrated bread knife to open a “lid” in the dough.  Do this at the table to really appreciate the aroma that’s released.  Then just carve the chicken as usual and discard the dough (don’t eat this, please).  It was almost an hour and a half from the oven to when we were eating, but insulated by the dough case the meat was still warm and tender.

A few bottles of nice red wine later (Montes NapaAngel) later and we were all very full and satisfied.  I need more afternoons like this.

1 Nagoya Cochin (or other good quality free range chicken), about 1.5kgs
A good handful each of fresh rosemary, thyme and marjoram
Zest of 1 lemon, taken with a peeler
1 tsp paprika
6 cloves of garlic, skin on