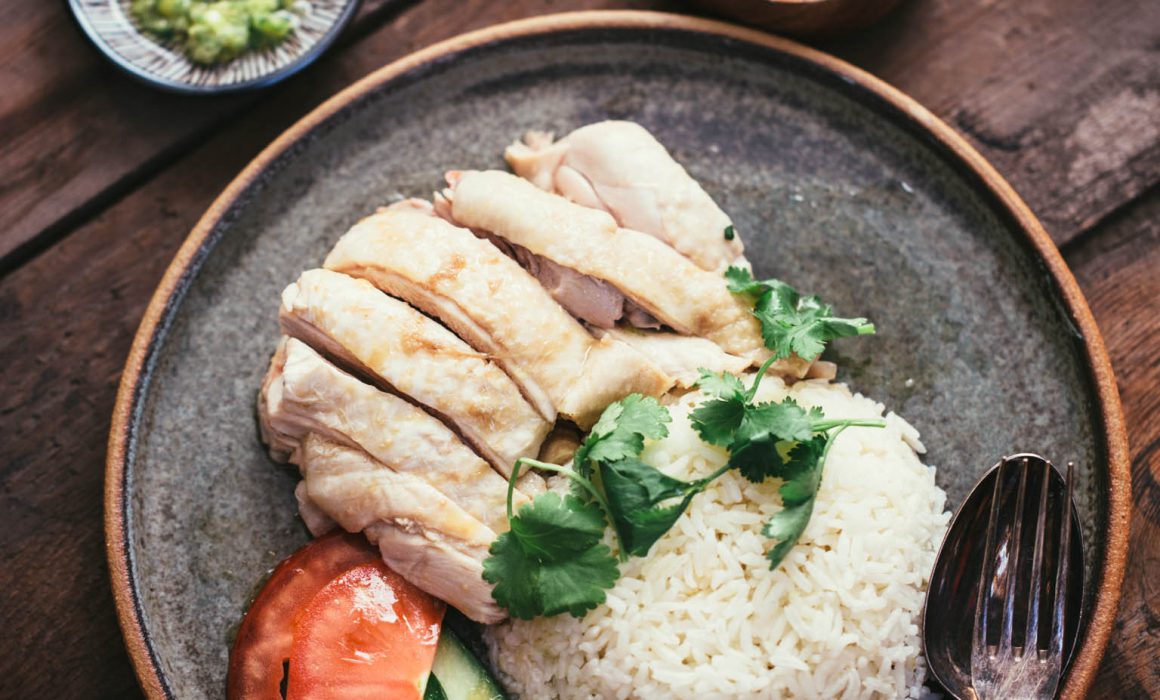 This post has been through a number of revisions of the years. A few little changes to the recipe as my style of making it changes, as well as additional information added for those who want to know a little bit more about the dish. You can jump ahead to the recipe and video below, but if you want to read on I’ve now included a bit of background on one of Southeast Asia’s most influential dishes. 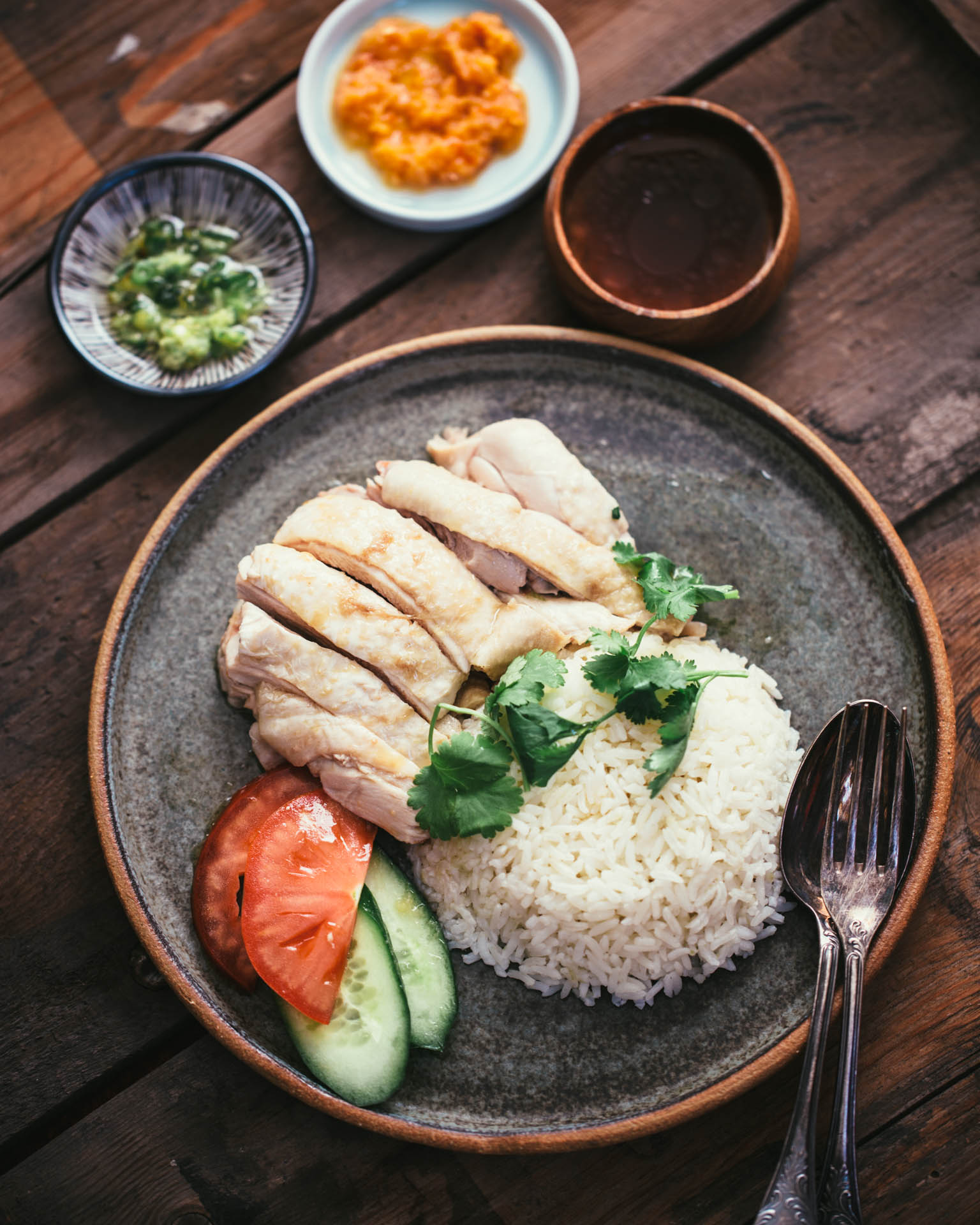 For those new to it, Hainanese Chicken Rice is a dish primarily attributed to Malaysia and Singapore although versions exist in Thailand (khao man gai) Vietnam (com ga) and Indonesia as well. It was created by migrants from the island of Hainan in China’s far south who arrived in Southeast Asia around the turn of the 20th century. My family is Hainanese, and my grandfather arrived in Malaysia from Hainan in around 1915.

The dish itself is based on a traditional Hainanese delicacy called Wenchang chicken. Specific free-roaming chickens from the Hainanese town of Wenchang are fed on peanut bran, coconut and various other things and they are famed for their generous fat, flavourful meat and tender skin. The most prized birds are the capons, huge 3-4 kilogram castrated roosters with incredible flavour. On Hainan, the Wenchang chickens are usually boiled just in salted water with the pure flavour of the bird itself. It’s then served with a sauce of some kind, which can vary from establishment to establishment. One popular sauce is made from salt-fermented crushed yellow chillies. The orange-coloured ginger and chilli sauce served with Hainanese chicken rice in Southeast Asia is an adaptation of this. 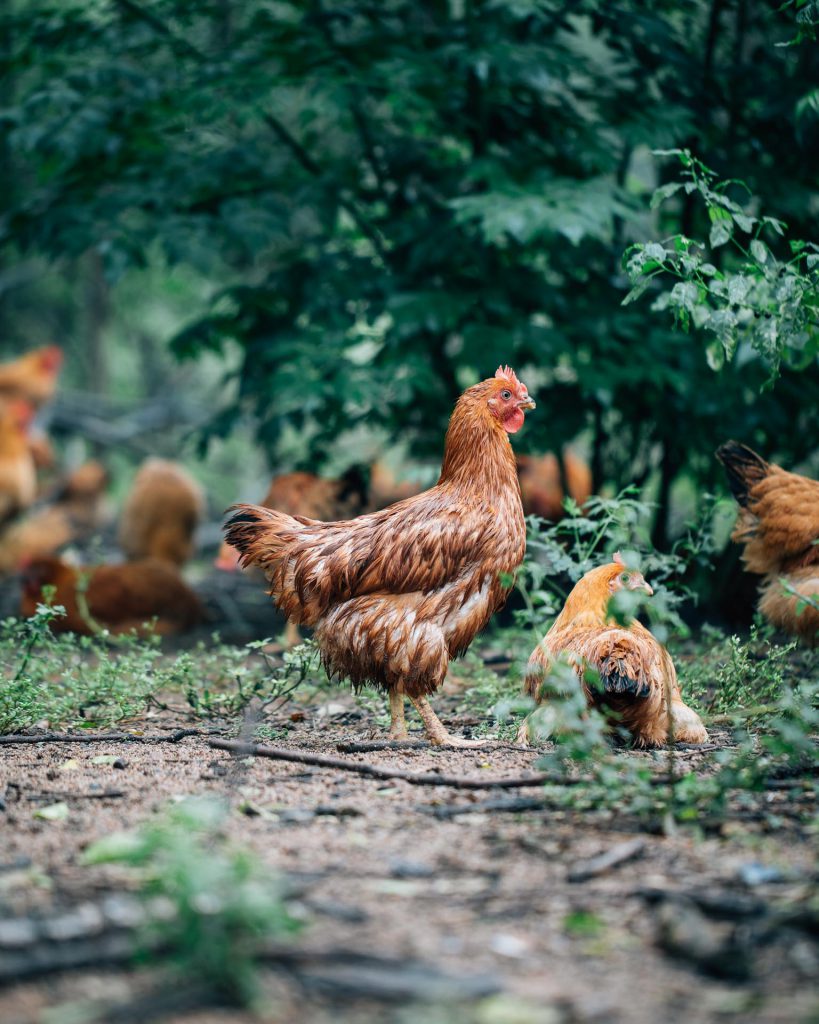 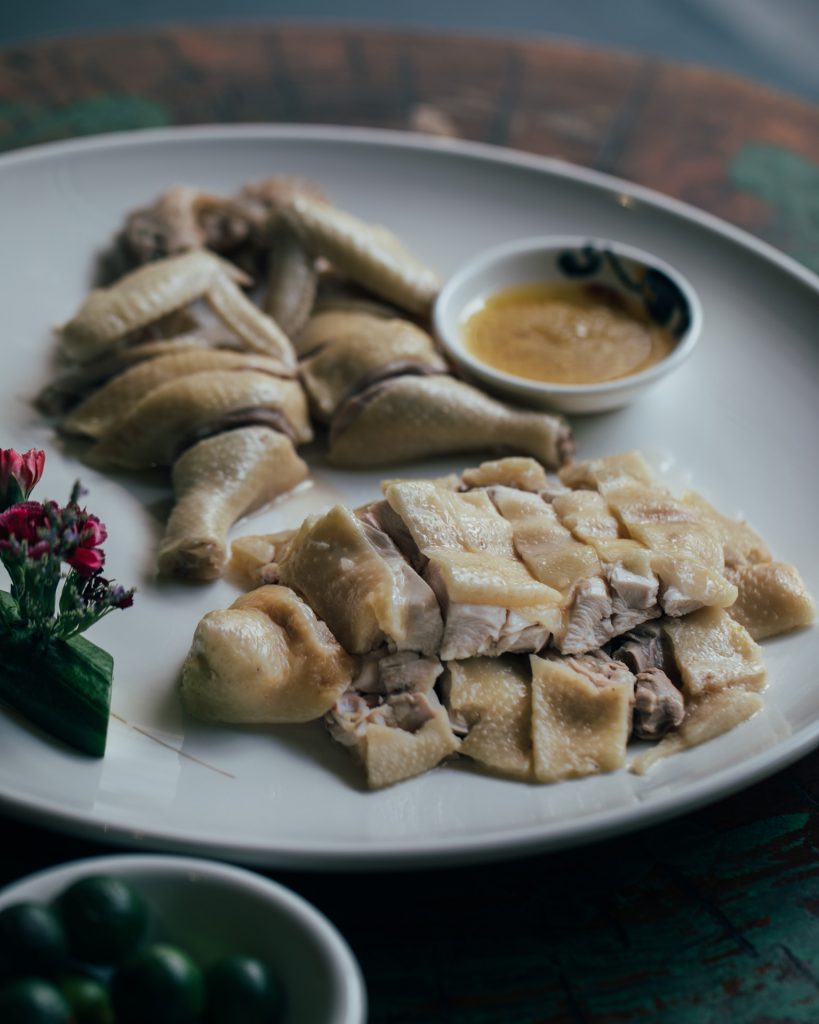 Of course, the dish is Hainanese chicken rice is very different from its origins in Wenchang chicken. The elements are generally (1) free-range or kampong chicken poached in a broth This recipe is my own, a combination of what I learned from my Hainanese grandmother (my grandfather passed away before I was born), my Singaporean-English mother, and my elderly cousin who ran a very popular chicken rice stall in Singapore for more than 40 years (it’s now closed).

I’ve written about Hainanese Chicken Rice for the Wall Street Journal (Chicken Rice for the Soul) and published versions of this recipe in two of my six cookbooks (my grandmother’s “Original Recipe” in Two Asian Kitchens) as well as this updated and version which appears in my latest book Destination Flavour: People and Places, which is a combination of recipes from my SBS television series of the same name.

For the chilli sauce, pound the chilli, ginger, garlic, sugar and salt together in a mortar and pestle until very smooth. Pounding chilli can take some time so to speed up the process you can start it in a blender or food processor and pound to finish, or grate the ingredients into the mortar using a rasp grater. Add the boiling stock to the pounded mixture. You can vary the amount of stock depending on the consistency of the chilli sauce you’re after. Stir in the juice, then adjust the seasoning if necessary so that the balance of sweet, sour and salty tastes is pleasant. Heat the chicken oil in a small saucepan until hot, the pour over the chilli mixture and stir to combine.

Remove the fat deposits from inside the cavity of the chicken, near the tail. Roughly chop the fat and place in a small frying pan over very low heat to render. Render the chicken fat, stirring occasionally for about an hour until you all the fat is rendered and the solids are crisp. Remove the solids and use them for another purpose. Reserve the chicken oil.

To begin poaching the chicken, pound the unpeeled ginger in a mortar and pestle and add to a large pot containing about 4 litres of water, along with the tops of the spring onions used for the ginger and spring onion oil. Add the salt and MSG or chicken stock powder (if using) and bring to the boil over high heat. Taste the water and adjust the amount of salt so that it tastes savoury and a little salty. Reduce the heat to very low and add the chicken to the pot. There should be enough water in the pot so that the chicken doesn’t touch the bottom of the pot, as that will cause the skin to tear. Lift the chicken in and out of the water a couple of times to change the liquid in the chicken’s cavity. If you have poultry hooks, use them to hang the chickens in the pot (see video below). The water should now be steaming but not bubbling. Keep the heat low at this level and cook the chicken for 45 minutes.

Using the poultry hook (or slotted ladle), carefully lift the chicken out of the pan, ensuring you don’t break the skin, and plunge into a large bowl or sink of salted iced water. Reserve the stock and stand the chicken in the iced water for at least 10 minutes, turning once. This will stop the cooking and give the skin its delicious gelatinous texture. Remove from the iced water and hang over a bowl or the sink to drain well. Rub the skin all over with the sesame oil. The chicken should be cooked very lightly, pink inside the bones and with a gelatinous skin.

To make the chicken rice, pound the garlic and eschallot (or onion) to roughly bruise with a mortar and pestle. Combine the rendered chicken oil with vegetable oil to make ½ a cup of oil. Heat in a wok over medium heat. Add the garlic and ginger stir until starting to brown, then strain through a sieve. Reserve the oil and discard the solids. Place the rice in a rice cooker or heavy-based saucepan. Add about 1.2L of the reserved stock from the chicken (strained) and the reserved flavoured chicken oil (or use the proportions as indicated on your rice cooker). Tie the pandan leaves in a knot (if using) and add to the rice. If cooking in a pot, bring to the boil over high heat and continue to boil for about 5 minutes until the level of the liquid reaches the top of the rice, then reduce the heat to very low, cover the pan with a tight fitting lid and cook for 12 minutes, then remove from the heat and stand for another 10 minutes. 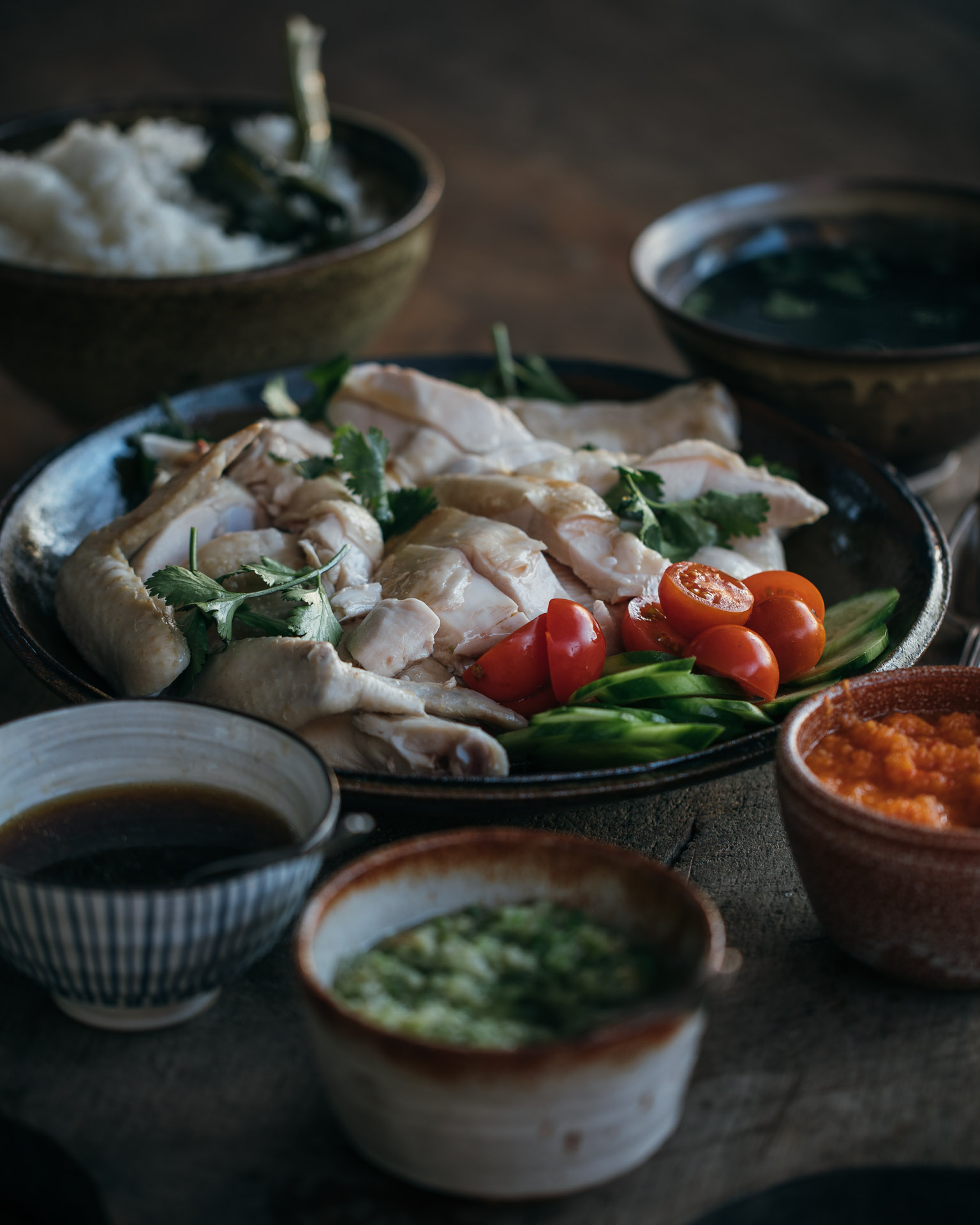 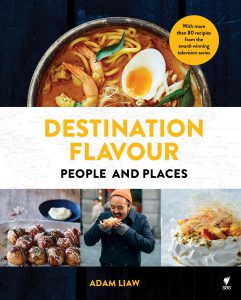 This recipe appears in my new cookbook, Destination Flavour: People and Places (2018) which follows my travels across my SBS television series of the same name. The book covers Australia, New Zealand, Japan, Denmark, Sweden, Norway, Singapore and China.